The Official Website of the State of Arkansas
Menu
Cabinet Secretary 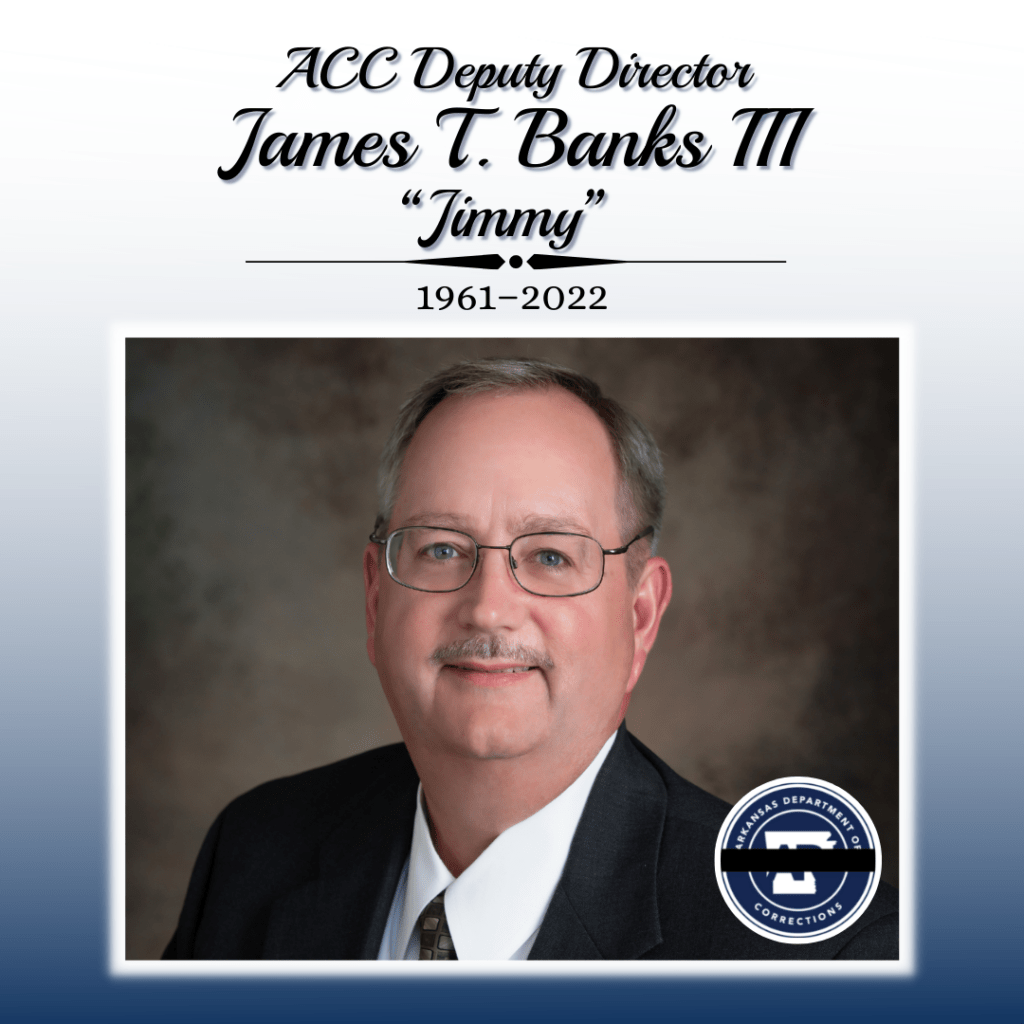 It is with a heavy heart and a deep sadness that we inform you of the passing of one of our own. James “Jimmy” T. Banks III passed away June 30, 2022. For many he was a supervisor, colleague, a friend, but to others, he was so much more. To try and put into words the impact Mr. Banks had on this agency would be impossible. There are literally hundreds of staff throughout the Department of Corrections who were impacted during his career. His knowledge and experience, along with his ability to develop and inspire those around him is irreplaceable. To put it simply, Jimmy Banks was the Department of Corrections. With over 30 years of experience, he had seen and done more than most will ever imagine. And he is someone many will never forget.

Jimmy had been suffering from a prolonged illness in recent years and even with that he continued to be a valuable asset to this agency, working from the hospital on occasion.

I have heard stories from past and current employees. His name will echo throughout the halls for many years to come. I’ve been touched by the many showings of support for his family. Sentiments have been shared by many, most notably, “he is a man of great character.” Never did he not have time to help with a problem, professional or private; nor did he refuse to pass up a teachable moment, mentoring by example. Jimmy was a man of faith, and it showed in all aspects of his life. He was a teacher to many but always remained a student, continuing to read and research, develop, and grow our programs and corrections as a whole.

Jimmy worked for many years, starting in September 1985 at the Tucker Maximum Security Unit as a Correctional Officer I. Working from one assignment to another including Deputy Warden at the East Arkansas Regional Unit, Deputy Warden and Warden at Varner/Varner Super Max, Warden/Superintendent at the Tucker, North Central, Delta Regional, and Grimes units, and ending his career as ACC Deputy Director of Residential Services. He was instrumental in the development of our agency, including being present for the groundbreaking of the Supermax Unit at Varner, the initial licensing of the Omega Unit, and the relocation and initial accreditation of the East Central Center in West Memphis.

His legacy is one that will live on through so many. Jimmy left his impression on so many who will continue the mission he started, with transforming our agency into one that not only holds individuals accountable, but also works to instill character and work ethic. He understood that even though there are individuals society chooses to forget about, our mission is to aid those individuals and, in doing so, develop a safer society for everyone.

There is simply no replacing an individual like Jimmy Banks. I know our hearts will be heavy for a time, but I hope that we remember his dedication to the mission and take it on as our responsibility to carry forward in his honor.

With that being said, I will close in saying “Rest on Sir. We’ll handle it from here.”

Check out our newly increased salaries!

Explore career opportunities and sign up for Career Alerts.